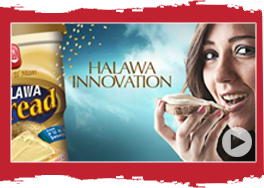 The history behind our iconic brand

Our story begins in the year 1889 during the reign of "Abbass II Hilmi" Bey, the last Khedive of Egypt and Sudan. There were tumultuous times but nevertheless Mohamed Hussein El Rashidi Effendi was determined to make his new family business, a confiserie (confectionary shop) in the popular Cairo neighborhood of Sayeda Zeinab specializing in Halawa. It wasn’t long before the shop’s reputation was established. Grocers would flock from all over the capital to stock Halawa and Tehina made from the purest sesame seeds.

The brand, named El Rashidi El Mizan, was so much in demand due to its consistent quality so that it became a staple of every Egyptian table.
El Rashidi Effendi’s passion for this industry was the seed of our own enthusiasm that was translated into a strong consumer base for more than 125 years. It won’t surprise you to know that our company shaped the Halawa market in the entire region and continues doing so today.

With over a century of expertise in the Halawa and Tahina markets, the company has always provided people with innovations which have made us an embedded brand in the culture; standing for heritage, quality and Egyptian "goodness".

Today, this company proudly stands as the leading Confectionary producer in the Middle East and North Africa and is among the strongest brands in Egypt with very high consumer loyalty and awareness exceeding 90% according to market research.
The delicious tastes of our indulgently healthy products have found their way into the heart of homes all over the region and our trademark has gained strong popularity among consumers from all income levels.

In a move to leverage 120 years of food industry expertise, El Rashidi El Mizan announces on July 2009 that it has begun production at the Middle East and North Africa’s most advanced jam and tomato paste factory.

The opening is part of Rashidi El-Mizan’s continued expansion of production as the company leverages its powerful local and regional distribution network to capture additional market share.

Today, the year of our 127th anniversary, the company’s distribution network reaches 90%  of Egypt’s 90 -million- strong consumer market and continues to grow an export presence that already reaches 45 countries.